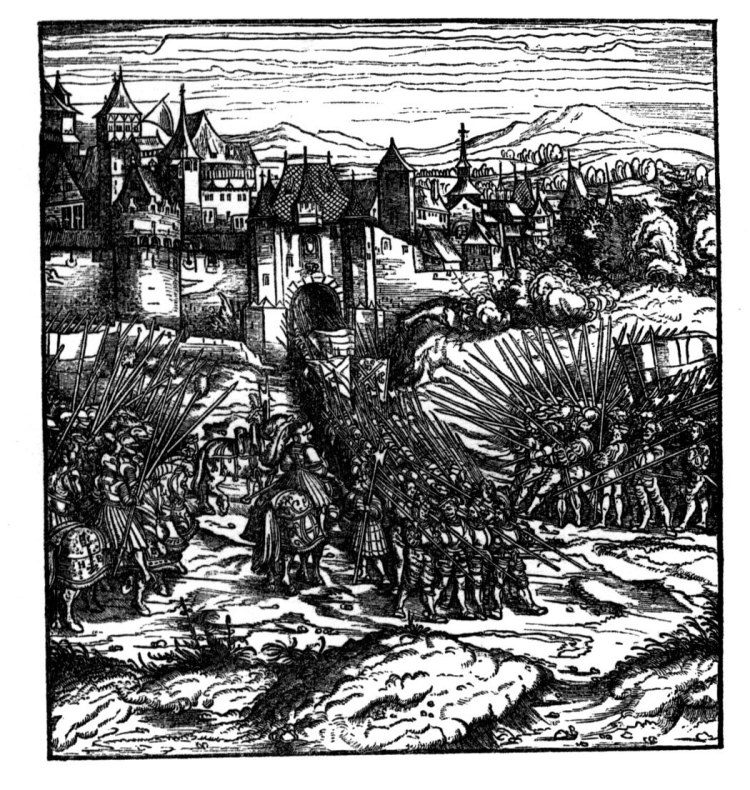 A battle or battaile was a medieval military formation, analogous and ancestral to the modern term battalion. In late medieval warfare, field armies were often drawn up into three main battles, also called guards: the vanguard, the middle guard, and the rearguard, often abbreviated to simply the van, middle, and rear. These terms imply, correctly, that the van preceded the middle, which in turn preceded the rear, into battle if the battles were arranged sequentially as a column. If arranged abreast, the van was on the right and the rear the left.

The Medieval Mode multiplayer option for HAVOC allows you to simulate large scale engagements without the downtime that can often accompany this sort of scenario in miniature wargaming.

In a 4 player game, if the points limit was 800 points, then each player could bring up to  800 points each.

In a 6 player game, each team will disperse their points based on the following guidelines. For this example, we will assume that the points value for the engagement is 1000 points.
1. The player who will command the Middle Guard, may bring up to 1000 points.
2. The players in charge of the Rear and Van may bring points up to 75% of the Middle Guard maximum (1000 points). So, the Rear and Van could bring 750 points each.

Each player may bring a ‘Named’ model.
Artillery MAY be included in a force, but will be limited in effectiveness due to special rules of engagement.

The Beginning…
The Beginning is conducted as normal, with the following exceptions:
Teams must decide where each member will deploy before conducting the steps in the beginning (and write in on their face down army list), BUT they do not share this information with the opposing team.
The team with the fewer combined total points choose whether they are attackers or defenders, as normal.
The team with the greater number of points will deploy their Vanguard ONLY. Then the other team will deploy their Vanguard. The Middle/Main and Rear sections follow in this same manner.

Gameplay…
Each section of the battlefield is now played as a normal 1 vs 1 game.

A player may, if they wish, move a model(s) over one of the lines that divide the field of battle. If this happens, then the model comes under control of the player who commands that section of the battlefield!
When a model moves over one of these dividing lines:
1. They are considered as being activated until the next Phase of the new commanding player.
2. These models are considered part of that players force until they are destroyed OR moved to another section of the battlefield.
3. A move across one of these lines may NOT cause a move-to-melee and/or Impact Hits.

**Players may not make ranged attacks across dividing lines!** (this is a little ‘gamey’, but neccesary)
** Standards/Inspire does affect models across dividing lines**
Important: once a battle has concluded on a section of the field (a force is eliminated or all objectives met), no more troops may be transferred across lines.

Some notes:
1. In this mode, you can actually run 3 different scenarios, one in each section of the battlefield, if you want to change ‘The Beginning’ a bit.
2. Some scenarios will require some new deployment zones, but it is nothing that an experienced group couldn’t come up with.
3. This mode of play requires a ‘social contract’ of sorts, to function properly. Each section of the board plays as a separate engagement, at its own pace. Players may communicate and observe other sections of the field, BUT stalling to gain advantage and/or transfer troops is a direct violation of the Rules of Form.

This mode can be serious fun for the right group of gamers. Just remember that there is no ‘out-of-game’ stalling. In-game stalling, on the other hand, is fine. What do I mean by that?

Let’s say that my opponent’s archers are causing me grief, and I need my allies fast cavalry to put the pressure on them so that I can get my infantry across the field. It’s perfectly acceptable for me to move them into a building, or behind cover, and activate them each turn BUT not move them, and end my turn, all while waiting for help. This allows my opponent to take his turns as normal. What’s NOT okay is for me is for me to activate my troops and pretend to not know what I want to do, go get a drink, etc., to deny my opponent activations while waiting for help.

One last thing, you can transfer a model that you have been given command of to another player. This means that a model could begin the game as part of the Van and end up as part of the Rear.