MAYHEM is a ‘fantasy mass battle’ combat game played on the grand scale. Here generals lead armies of their own creation on the field of battle in search of victory and glory. Not just for wargamers, MAYHEM is perfect for roleplayers looking to integrate a customizable set of mass combat rules into their campaigns and adventures. 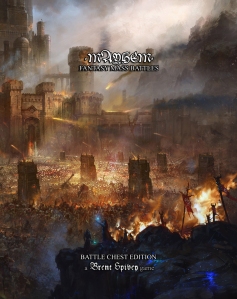 The BATTLE CHEST edition, which includes both the core rules and the STRONGHOLD expansion, is now available worldwide in full color print on Amazon.com, Amazon.co.uk, Amazon.de, Amazon.es, Amazon.fr, Amazon.it, and here in the site’s Shop. Note! If you have a discount code for the print version, then it can only be redeemed here on the site!

The PDF version can be purchased and downloaded for just $9.99 from Wargame Vault! There’s also a PDF and print bundle at Wargame Vault for $24.99.

The MAYHEM core rules give you complete control over building your army from the ground up. After creating core profiles and heroes, you have over 60 options at your disposal that can be used to equip and upgrade. These include unit designations, weapons, armor, standards, traits, abilities, and gear.

The VERSUS game engine layers mechanics and interactions in such a way as to provide a truly innovative and unique gaming experience. To begin with, stats in the game are not based on fixed numbers but on die types instead. Anytime that you are called upon to roll dice, you may instead choose to take the default; this is equal to half the value of the die. This choice of risk versus reward is behind every decision in the game.  These die types can be improved in steps depending on which weapons a unit is equipped with and what type of unit it is combating. This system of soft and hard counters means no complicated tables or stat lines are needed, yet it rewards the application of both tactics and strategy.

The game can be played at any scale, and players may use armies already based for other popular mass battle systems. Speaking of basing, there is no individual casualty removal in the game so hobbyists are free to make each unit a mini diorama. And, after you’ve mastered the basics of battle, the STRONGHOLD expansion awaits!

The STRONGHOLD expansion includes rules for:

The expansion has been set-up as a toolbox that will allow you to pick and choose the rules that best fit your group and the gaming experience you’re looking for. It also means that the core rules will grow and evolve along with your tactical and strategic abilities.

The download includes the General’s Compendium. This is a living document that gives would-be generals example unit profiles, advice on tactics and army building, designer’s notes, musings, and meta-game discussions. This document will be updated periodically and be used as a FAQ as needed.

Have fun storming the castle!