ROGUE PLANET is available on Wargame Vault in PDF and print format for just $9.99. There’s also a print/PDF bundle for $14.99. The print edition is available here on the site for the low, low price of just $9.99 as well and on Amazon.com, Amazon.co.uk, Amazon.de, Amazon.es, Amazon.fr, and Amazon.it worldwide. That’s right, it’s only $9.99 for the print edition! The ‘Derelict Planet Edition’ of the game is available for $29.99. A full size preview of this special full color edition can be seen here.

Welcome to ROGUE PLANET™! A derelict world where you can experience true sci-fantasy gaming that allows you to fight skirmishes that focus on the cinematics and action of the genre without skimping on the tactics. It features:

ROGUE DIE™ | The ROGUE DIE mechanic allows you to counteract your enemies’ actions during their turns and fuels your powered weapon, powered armor, and psionic force weapon abilities and effects. Counter-actions include things like: dodging, returning ranged fire, counter casting, and intercept maneuvers.

PAWN SYSTEM™ | The innovative PAWN system provides a unique mechanism for representing your leader’s retinue and followers and makes for dynamically changing battles as your hero loses abilities, power, and support during a game. PAWNS are also a prime feature of the campaign system and allow a leader to gain new abilities, change strategies, and evolve as a adventure progresses.

Pawns include: ammo grunts, bots, expendables, familiars, intimidators, and brutes [and many more!]. Who will follow you into battle?

FX | The FX Physics Engine™ powers the epic throws, collisions, and staggering blows on ROGUE PLANET. It also gives players the option to make the battlefield more interactive with the implementation of destructible, throwable, and treacherous terrain types. Want to throw an orc in powered armor halfway across the battlefield into a group of goblins and see what survives? FX makes it happen!

ENERGY | The ENERGY expenditure system allows you to simulate the strength of your force, powers the various armor ratings of your troops, and gives you the option to keep your units in play when you want or need to- but there’s always a cost!

GOT SKILLS? | Actions on ROGUE PLANET are a measure of skill. You’ll find no ‘buckets-of-dice’ or straight-line probabilities here. The interactive skill check system means that all players are constantly involved in the game, and you’ll need to work for the best possible tactical advantage or risk having your opponent counter you and take advantage of your failures.

NO BOOKKEEPING! | There are no hit point boxes, extensive tables, or detailed stat tracking on ROGUE PLANET™. Not only that, but there are no chits, tokens, spell, psionic, or effect markers littering the table either. The focus is always on the miniatures, terrain, and action on the table.

MEASUREMENT? | There are no measuring sticks, grids, rulers, centimeters, or inches used for the game. Measurements are based on the relative position of units, line-of-sight [LOS], terrain, and the in-game FX Physics Engine™.

CREATE WHAT YOU WANT

CUSTOM FORCE CREATION | Point based unit creation system gives you total control to bring your force to the tabletop in the way you envision it.

EQUIPMENT AND UPGRADES | There are over 30 different types of base weapons, armor ratings, and enhancements in the game that be used by themselves to equip your troops or combined with one another to create almost limitless supply of custom combi-weapons. These upgrades include: axes, blades, lances, blasters, heavy launchers, powered armor, powered fists, gravity hammers, chained blades, psionic force weapons, and grenades.

SORCERERS AND PSYCHERS | What sci-fantasy world would be complete without the inclusion of sorcerers and psychers. Heroes on ROGUE PLANET can be either [or both!] and wield powers like: psionic throw, anchor, time stop, magic missile, blink, deflection, and more. May the psionic force be with you space wizard- always.

PLAY HOW YOU WANT

GAME TYPES | There are multiple levels of play that allow players with various collection sizes and gameplay preferences to enjoy the game and have it grow with them. Patrols, Strikes, Missions, and Extended Ops ensure that there’s always a new way to experience adventures and combat on this derelict world. For example, during Extended Ops, your heroes may not only gain new followers but just might gain [or become] a nemesis.

SCENARIOS | The included scenarios range from simple battles to ambushes and there are also options for unique modes-of-play featuring ROGUE elements.

PLAYAIDS | A quick reference sheet [QRS] and force construction price sheet are included in this download. Additionally, the PDF is fully bookmarked to make finding the information you need as quick-and-easy as possible.

Quick reference sheets and a unit pricing sheet are also available for free download in the files section on BoardGameGeek.com.

The download also includes a set of house rules and a scenario generator created by Thibault Bloch. This rogue variant takes players to a gritty industrial sci-fi planet ruled by violence were rival 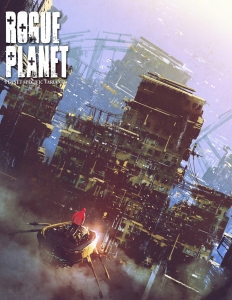 gangs fight for supremacy, glory, and resources in a harsh post apocalyptic landscape.

The download also includes a full color cover image specifically for these [and all future] planet specific variant rules!

For those that purchased a physical copy of the game and don’t have access to the Wargame Vault download, the new rules and scenario generator can be download for free from the files section for Rogue Planet on BoardGameGeek.com.